Five not to miss art shows in NYC this summer

I never seem to be able to keep up with all the great art shows and events going on in New York City. If you are planning a visit soon, here are some absolutely not miss art shows going on right now. Anyone interesting in an art date? 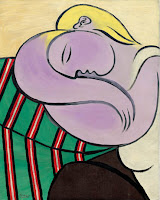 1) Picasso and Marie-Thérèse; L’amour fou from April 14 – July 15, 2011 The very successful art gallery, Gagosian Gallery,  is also well known for putting together blockbuster exhibitions free to the public. The New York gallery is located in the trendy Chelsea/meat packing district. After attending the show, check out the nearby highline with its newly opened expanded spaces.This particular Picasso exhibition focuses on the paintings of his lover. So the story goes, Picasso approached Marie-Thérèse on the street and announced he was Picasso but she had no idea who he was although he was already world famous. They began a secret and passionate love affair as she became his primary model, muse and mistress 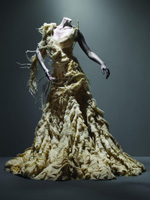 2) Alexander McQueen: Savage Beauty
May 4, 2011–August 7, 2011  at the Metropolitan Museum of Art. This tragic fashion designer committed suicide last year and so early we get a retrospective of the designer’s work. The Met has a long history of fashion and design and has a wing which is dedicated to costumes and period clothing. Now I haven’t seen this either, but by all reports this show is fantastic. I was recently at the Met and was discouraged by the really long lines snaking throughout the museum like the rides at Disney World. The guards told me you have to get there by 9:30 to beat the lines but since that time they are ow offering priority admission for members and are even opening the museum on Mondays just for the show. If you go on Monday, you need a t $50 ticket to see the show and that’s all you get to see. Better, to go early on a different day and then after you can enjoy the roof terrace. Suggested museum admission is $20, but you can pay what you wish. My favorite experience is to go on a friday night so that you can get the live free jazz musicians at the Petrie Cafe and wine bar that overlooks Central Park. If you still have energy, head over to Guitar Heroes and get the ipod audio tour which lets you listen to the music played by each guitar on display.

3) Collecting Matisse and Modern Masters: The Cone Sisters of Baltimore May 06, 2011 – September 25, 2011at the Jewish Museum.I’m not copletely sure why this exhibition is at the Jewish Museum except that the collectors, the Cone Sister, were Jewish. These spinster sisters lived in adjacent apartments in Baltimore and established an amazing art collection. This exhibition features over 50 works of art—by Matisse, Picasso, Gauguin, Renoir, van Gogh and more—from The Baltimore Museum of Art’s world-renowned Cone Collection, this exhibition focuses on the remarkable vision of two Jewish sisters and collectors, Dr. Claribel and Miss Etta Cone of Baltimore, and the personal relationships they formed with artists such as Matisse and Picasso, as they shaped their extraordinary collection.iF you are kosher, the museum’s cafe offers all koshjer fare. If you are not, then head over to Alice’s Tea Cup on 81st street for ladylike tea and scones.

March 27–July 11, 2011 at the Museum of Moden Art. I’ve had a glimpse of this exhibit and I am looking forward to going back so I can spend more time studying it. I visited this exhibit with my daughter and after we were inspired to create our own wood cut prints. You will be amazed at these artists from E. L. Kirchner to Max Beckmann. From the museum’s website…”artists associated with German Expressionism in the early decades of the twentieth century took up printmaking with a collective dedication and fervor virtually unparalleled in the history of art. The woodcut, with its coarse gouges and jagged lines, is known as the preeminent Expressionist medium, but the Expressionists also revolutionized the mediums of etching and lithography to alternately vibrant and stark effect. This exhibition, featuring approximately 250 works by some thirty artists, is drawn from MoMA’s outstanding holdings of German Expressionist prints, enhanced by selected drawings, paintings, and sculptures from the collection. The graphic impulse is traced from the formation of the Brücke artists group in 1905, through the war years of the 1910s, and extending into the 1920s, when individual artists continued to produce compelling work even as the movement was winding down” For lunch, go to the museum’s cafe on the second floor and sit near a window. I love the chickpea salad and the other small plates.

5) Edward Hopper, Prelude the Nyack years May 21st – July 17th. You will have to go outside Manhattan to catch this gem of an exhibit. As soon as my kids leave on their camp bus from the Palisades Center, I plan on heading over to Nyack to the childhood home of Edward Hopper in Nyack. This pace has a special place in my heart since I used to draw from live models every Tuesday night at the Hopper house and I got my start selling art on the internet by selling these life drawings. This exhibition concentrates on works of art created during his years in Nyack and is supported by the Whitney. The exhibit opens at 11 on the weekend and after you can explore the antique shops and trendy Greenwich Village like atmosphere of the streets of Nyack.