SchulmanArt: Where are you from and where do you live now?
Jerise: I grew up in NJ, near Philadelphia, and have lived all over the US—in Michigan, Nebraska, West Virginia, Pennsylvania, and New York—and for a year also in Germany. I love to travel. Currently,  I live in New York City, in
Washington Heights.

SchulmanArt: How long have you been an artist?
Jerise: Well, I have been doing art since I was very young. I took high school classes in ceramics and drawing that made a big impression on me; I took some Studio Art classes in college, and I have attended drawing sessions in most of the cities I have ever lived in, sometimes more regularly sometimes less. I keep a sketch book and love to sketch around the city. Since college and grad school, I’ve taken studio classes at Parsons School of Art and Design, and at the School of Visual Arts, both here in New York City. I have also taken quite a few calligraphy classes, some with the Society of Scribes again in NYC.

SchulmanArt: I love your Ketubahs. Could you please explain to my reader who may not be familiar with Jewish wedding customs a little bit about their history in traditional marriage ceremonies? 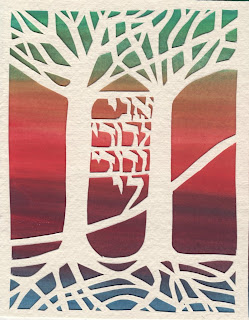 Jerise: Ketubahs (the plural in Hebrew is ketubot; the word basically means “written text”) are fascinating documents. They began as a simple legal contract specifying the monetary obligations of the groom, and stipulating that the groom, in accepting co-responsibility over the money and property that was being brought into the marriage by the bride, would need to pay all that back if the marriage were ended for some reason. So, basically, the ketubah was a document to protect the woman from being exploited, and from having her money and goods stolen away, should her husband leave her, or should she want to get out of the marriage. It was very progressive in its time. Modern Orthodox and Conservative ketubah texts stick fairly closely to this original idea of the contract; modern Reform ketubah texts vary widely—some sounding very contract-like, and others talking more about emotional and spiritual support and partnership. Many couples write their own ketubah texts, and you can even take classes in how to do this in such a way as to satisfy your tradition’s legal requirements.

SchulmanArt: How did you learn ketubah design? What special skills do you need?
Jerise:  I had always admired those old papercut designs that one sees in books and museums. With that in mind,  I tried something rather intricate, and delicate, with paper and an exacto knife, for someone who asked me whether I would do their ketubah for them. Trees are a lovely subject for this kind of thing, and I’ve always liked drawing from nature, so that part was pretty natural. I had also worked with stencils and screenprint, so that helped my design sense. I had practiced and sometimes studied calligraphy since I was a teenager, and developing my skill with Hebrew letters is an ongoing project for me—those are really the two essentials, text-wise. I have a background in Greek, Latin, some ancient Hebrew, and several other languages, which always helps.

SchulmanArt: What music do you listen to while creating?
Jerise: I don’t have too many art rituals—unless making coffee counts! I tend to listen to Joan Baez, or sometimes k.d. lang (Hymns of the 49th Parallel), when I’m cutting designs out; my other favorites are: Kateryna Kolcova (her CD “Karev Yom (Day is Near)” is amazing), the Klezmatics (anything!), Bustan,  Jane Siberry, Simon & Garfunkel, John Denver (sorry, it’s true, don’t laugh!), Sweet Honey in the Rock (especially Sacred Ground and B’lieve I’ll Run On), Chopin (Études), the Indigo Girls, and the Chieftains (San Patricio).

Jerise: I live in a one bedroom apartment, and the bedroom is my studio (I sleep out in the living room on a futon). It’s in transition from a messy space to a more organized space. Right now, there’s a lot of paper around, but when I get cleared up more I will let my cats come back in and hang out in the armchair or on the windowsill as I work, which makes me calm.
The view is not much to look at—I look out onto an inner courtyard of the apartment building—but there is a really nice time around 3pm every day when sunlight floods the space and makes me very happy. And I love my pretty fire escape latticework.

SchulmanArt: What is your most popular item other than the Ketubahs?
Jerise: My Obama-in-Yiddish t-shirt has been selling well lately as well as holiday-related, or anniversary-related cards. I have a little papercut card that says “I am my beloved’s and my beloved is mine” in Hebrew, with little trees on either side, that people tend to like a lot. In addition, my NYC Sketch Calendar for 2012 is doing very well.

Jerise: I love custom work, so I have done Bar and Bat Mitzvah invites and artwork, and would always be happy to do that again.

To commission Jerise for your wedding or special event, please contact her at

10 thoughts on “An Artful Tradition in Jewish Wedding Ceremonies”