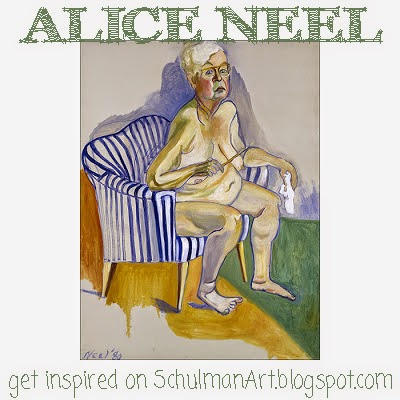 This post is part of my “famous women artists” series where I turn the spotlight on different women artists. This week we focus on modern painter Alice Neel.

Alice Neel is known for psychologically disturbing portraits during the twentieth century. Initially a painter in Greenwich Village, she moved to Spanish Harlem to blaze her own trail. Painting portraits while most artists during her time shunned representational figure painting, especially portraits, Neel gained prominence by painting portraits of other artists such as Andy Warhol and well known public figures. She had a solo retrospective of her while she was still alive at the Whitney Museum of Art. When she passed in 1985 she had a “Joan Rivers worthy” memorial service at the Whitney Museum which was attended by luminaries such as Mayor Ed Koch. In addition, poet Allen Ginsberg gave his first public reading of his poem ‘White Shroud’ at her service.

It was more than a profession. It was even a therapy, for there I just told it as it was. It takes a lot of courage in life to tell it how it is. ~Alice Neel

Samples of her artwork

While cruising the internet for pictures of her art to download I was met with glaring warning about “copyrights” and reprodcuing her art without permission. To avoid all that I went onto Amazon to show you some book covers with her art on it. Here are some books about Alice Neel.

There are over 100 titles on Amazon about Alice Neel.

Whether I’m painting or not, I have this overweening interest in humanity. Even if I’m not working, I’m still analyzing people.

Current Exhibitions of Alice Neel’s Paintings Around the World

If you liked this post, be sure to check out:

Did you like article about famous women artists? Subscribe to my blog so you don’t miss a single inspirational post. I like to write about artists, color trends, art journal ideas and my other art adventures. You can subscribe by Email / RSS / BlogLovin / NetworkedBlogs.

What do you think of these portraits?