Degenerate Art: The Attack on Modern Art in Nazi Germany 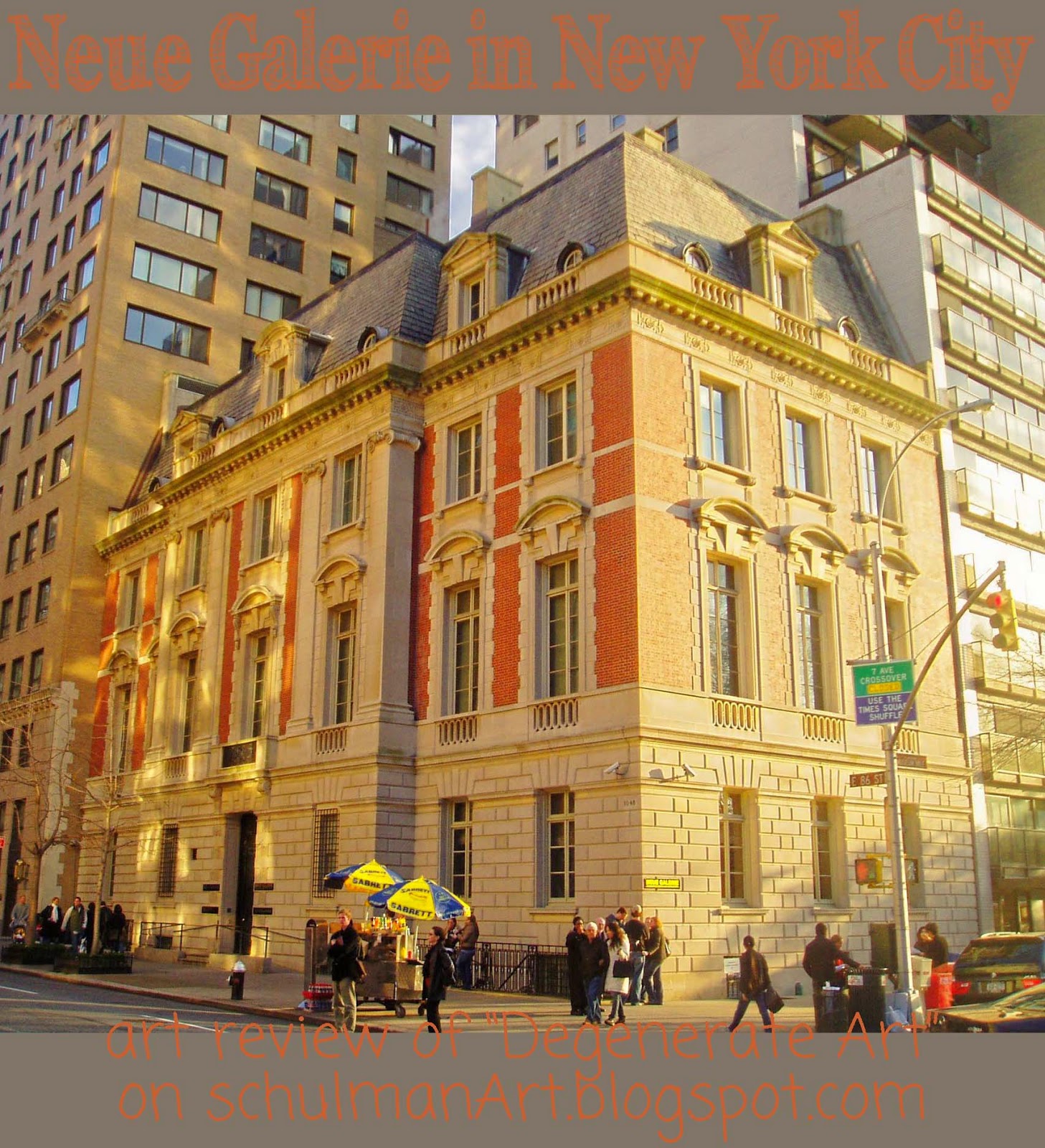 Last weekend I had a chance to attend the Neue gallery in New York City to see their latest exhibition. The museum which resides on the corner of 86th and fifth avenue is a relatively new museum devoted to German and Austrian art. It’s small size and divine Viennese cafe makes this little New York gem a must see in New York City.

My husband groaned when I insisted we had to go to the exhibition, but knowing he is a World War two buff, I drew him in with promises of rich European history and neither one of us were disappointed.

History of  The Attack on Modern Art in Nazi Germany

Under Nazi regime, modern art also came under attack and hundreds of artworks were rounded up and deemed unacceptable under the perverse Nazi standards.  Although only about 6 of the over 100 artists declared “degenerate” were actually Jewish, the Jews were blamed for the contagion in the society. Art was seized by the government out of galleries and museums and some artists, such as Emil Nolde, were forbidden to paint.


No such thing as negative publicity

The art in this exhibition was part of the traveling show that the Nazis had put together to ridicule the art. Whether derided or not, this art show was the most popular of its day and attracted millions  of visitors. Little is known of the public reaction to the art since the public record were wiped clean of anti-government sentiments. However, one wonders if perhaps the “negative” publicity given to this art show actually increased the popularity of the abstract expressionists work and developed a taste for this art that may not have preciously existed.

In addition to the art that was part of the “degenerate Art” of 1937, the Neue gallery also shows us an example of art revered by Hitler.  Adolf Ziegler’s triptych The Four Elements: Fire, Earth and Water, Air (1937) was part of Hitler’s personal collection and depicts aryan classical beauty in the form of four naked German woman. Ziegler was also known as the master of German pubic hair for his neoclassical and realistic attention to these parts. In addition to mounting the “Degenerate Art” show, the Germans also curated a show of “German Art” which was poorly attended.

Emil Nolde, although initially a Nazi sympathizer, was not immune to their attack on modern art. Working in the abstract expressionist style, Nolde was forbidden to paint during this time and the affect on his career was devastating. In order to paint in secret, he switched from the fragrant oil paints to scentless watercolors and made small watercolors which he later developed into large scale works after the war. These watercolors were amongst my favorites in the exhibition.

As usual, as I write this blog post I am cursing myself for not buying a book of Nolde watercolors from the gift shop. Naively, I thought I could just download the pictures I want for this blog thinking that I could find my favorites online. However, art is so subjective, that you quickly learn that your favorites are not everyone else’s. So, although I have found some examples of great Nolde watercolors to present here, they may not necessarily be the ones included in the exhibition. By the way, photography is forbidden in this gallery and the matronly guard had already reprimanded me for carrying around an oversized “purse” which was not really a purse, but my art journal book and camera shoved in a bag and then shoved in my purse.

Lest we forget the evils of this period, a large photo mural of Jewish people arriving in Auschwitz-Birkenau in 1944 is mounted in the gallery’s narrow hallway. For although many of the paintings and the reputations are recovered, the lost lives can never be…

Want to see this show?

Neue Galerie New York is located at 1048 Fifth Avenue (at 86th Street). The museum is open every day except Tuesday and Wednesday. Although the regular admission is $20, you can take advantage of free Fridays from 6-8 on the first Friday of each month. This exhibit closes on September 1, 2014. Don’t forget to visit the Cafe Sabarsky while you are there for desserts from the masters.

If you are in the New York area this summer, you should also check out my blog post on 6 FREE NYC Summer Art Adventures

1 thought on “Degenerate Art: The Attack on Modern Art in Nazi Germany”