online-art-classes
Around the room there were three circles of easels with two nude models perched on a draped platforms. However,  no one seemed to be paying much attention to the beautiful naked bodies in the room except for Alyssa Monks and Will Cotton who were preparing their demonstration in one corner of the room.
Having found my friend and my courage (through a glass of red wine) we approached the two artists and introduced ourselves. Will’s first comment to me was “Are you excited to draw tonight?” which was said in a tone that clearly made me understand that he assumed I had never drawn before. The truth was, most of the folks in the room had never drawn before so it was a fair assumption. Also, the full ticket price of $500 made it unlikely that any starving artist he never heard of would be coming in to “just draw” that night.

Guilty.
I  actually had chosen the cheaper “junior” admission ticket price. There was nothing on the website declaring what a “junior” meant. I figured the worst that could happen was that I was carded at the door and asked to cough up a bigger donation.  A humiliation I was willing to risk.

With this drawing, I was completely pleased with myself and knew I had brought my “best self” to the easel that night.

“No, you can not have my drawing.”

Now here is the punch line of the story. Just prior to drawing this, remember I was talking to Will Cotton who had refused to give me his little sketch. So when he came over with his eyes glinting. I gleefully detected a fleck of green in them. (You can compare my drawing with Will’s 20 minute demo above.) While he and Alyssa Monks gaped in amazement, and serious art collectors, such as a board member of the Whitney, murmured their appreciation. Alyssa declared that I should do the demonstration at the party next year. She wasn’t kidding.

I joking told Will that “No, you can not have my drawing.” and that was that.

In Case We Haven’t Met Yet… 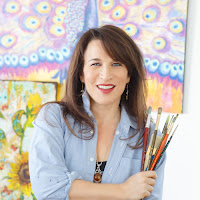 Hello! I’m Miriam Schulman and I create mixed media art to tell stories. I also teach other people how to craft their stories with art. I give them the techniques they need to get the results they desire which brings more joy to their lives.

My art has been published by Somerset Studio, Art of Man and the New York Times among others and collected by an international audience. When I’m not working on art in my studio, you’ll find me in a museum spending time with friends or family. Explore my art at SchulmanArt.com or join the fun at TheInspirationPlace.net

Now, I would love to hear from you! If you could steal any artwork you wanted, what would it be? ( no need to limit yourself to the Museum of Modern Art)

5 thoughts on “Flesh Food and Fundraising”